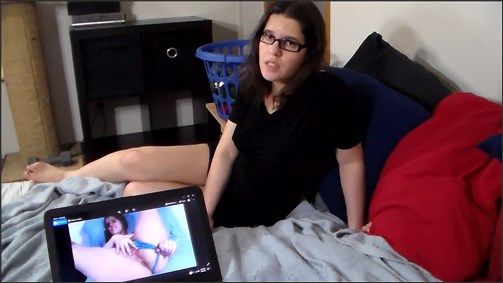 The scene starts out with mother being in the bathroom. Her son is spying on her through a crack in the door. Mother is naked and decides to use coconut oil to get her body nice and soft before going out for Mother’s Day with her girlfriends. She gets a bit carried away and rubs her clit to orgasm while caressing her oily tits. She remarks that she hopes her son gets his chores done before she turns on the shower head to rinse off. The scene cuts to son in his bedroom looking at a very naughty picture of his mother. She hears Mother calling out for him with pet names. She comes in with a load of laundry. She complains, which her son imagines some naughty innuendos, with the way she words things. He did not have time to get the imagine of his computer. Mother sees what he has been looking at. Those pictures were meant for her dates, not him. After coming to terms with her feelings, realizing she is more surprised and flattered than angry, she is curious to see how far things go. After all, she is surprised that her own son would have these sexual feelings towards her. He is even still hard underneath the covers.. She seduces him with dirty talk and a slow striptease. Then she gives him a hot blowjob before getting on top and riding him. Forbidden lust makes Mother feel so good, she creams all over him. Then, she wants her son to show how much of a man he is. He fucks her in a sideways position before pounding her missionary. Mother begs him to creampie her. Once he does, she cleans off his creamy cock before grabbing her dress and telling him she should be leaving for Mother’s Day festivities. However, maybe he could be dessert when she comes home.