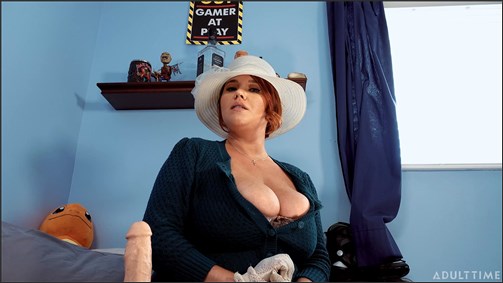 It’s Sunday morning and Annabelle Rogers, a devoted churchgoer, is in a rush to get to service but her 19-year old son is stalling by secretly jacking off in his room. Annabelle asks him what’s taking so long and opens the door before he can cover up. Shocked and angry, Annabelle’s offended that he’s making them late for church for such a sinful act. He pleads with Annabelle to let him finish. When she refuses, he points out that he’ll be sporting a huge boner in his church pants and everyone will see and she’ll be embarrassed. She frets, realizing that he’s right, and ultimately agrees to let him finish. She reluctantly waits, but quickly starts getting impatient as he strokes in front of her. Soon he says coyly that he needs some help if she wants him to finish quickly. Although Annabelle’s prudish and reluctant, she eventually gives in and agrees. Oh, well…better late than never!