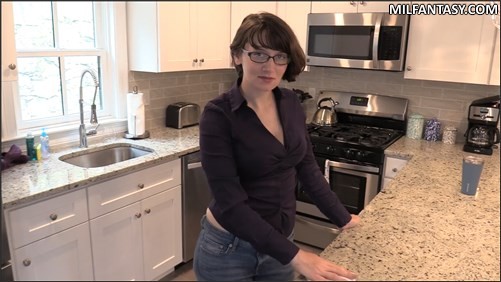 Last year, you and your mother had a…well, a thing. Yeah, like that. It wasn’t planned or anything, and nothing has happened since, but there’s no denying it happened. It was a one-off, you tell yourself. The two of you promised never to talk about it again, but you think about it constantly. It was amazing – feeling your mother’s body…the electric feeling of her hands on you, the feeling of your lips against her nipples, her stomach…but, true to your word, you’ve never admitted how often these images play in your mind. Until today. You were just in the kitchen, chatting with her, when the conversation shifted. Somehow you started to talk about dating. She’s never had trouble in that department – she’s not desperate or insecure – but the two of you don’t ever really discuss stuff like that. Especially not since…that night. But today, you start to chat. And she asks you about your own love life. And you don’t know why, but you tell her that girls your age just don’t do it for you anymore…and its obvious why. There’s no pretending she doesn’t know what you’re saying. You’d like to say you stayed strong and it ended there, but you were both turned on before much was even said. You watched her breath get faster as you told her you still think about that night. You watched with boundless anticipation as she moved towards you, reaching out, unzipping your pants and pulling your hard cock towards her. Dropping to her knees, she moaned as she sucked and licked and slurped. It didn’t take long before she confessed that the one thing she really regretted was…not letting you cum inside her. And now, the two of you on the kitchen floor, your cock buried inside her, she’s taking you all the way inside her, begging you desperately to fill her with your hot, sticky seed.