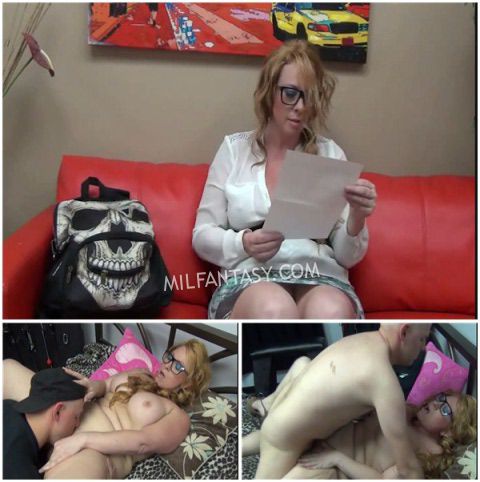 Dante’s mom spanks the living out of him when she finds out he is skipping school! Then she forces him to hump her as further punishment. The welts on his ass are visible as he thrusts away at his mean mother!

When Deanna finds her Son Dante’s Report Card hidden in his backpack she unearths a disturbing fact! Apparently Dante has 33 absences on his Report Card! Deanna is furious, of course and confronts her truant Son. Dante promises better behaviour next semester, but Mom will have none of it! Deanna is very clear this misbehaviour shall result in the dreaded “Trip To Mommie’s Bedroom”! Dante is terrified and begs her NOT to resort to a “Trip To Mommie’s Bedroom”, but Deanna grabs her young Son by the ear and drags him upstairs to her torture chamber of a bedroom! Dante is forced to bend over Mommie’s Spanking bench and take some serious and damaging corporal punishment from his Mother! There are welts blazed into his backside by his angry Mom! After he cries from the hard spanking the punishment gets worse. Mom takes her clothes off lies back and orders Dante to eat her pussy! The terrified, marked up boy does what he’s told, to avoid further beating and licks away at his Mom’s Cunt. Then, as a continuation of his punishment, Dante is ordered to mount his Mother and pump her! “Fuck me….Fuck me!” Mom cries out as the frightened boy humps his own Mother. Poor Dante gets too excited, however and ejaculates before his Mom has a chance to climax prompting Mom to dump his cum all over him and call him a loser! After this humiliation he is likely to attend every class next semester! Who says spanking doesn’t work?