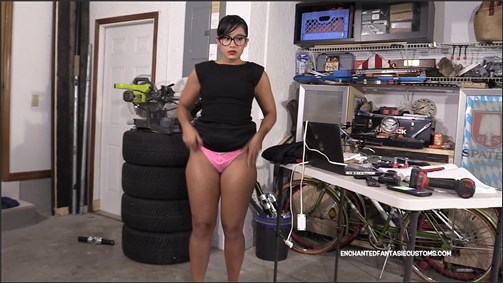 Mommy comes home to once again find Junior tinkering on one of his projects surrounded by a mess of clothes, books, tools, etc. Without hesitation, she launches into a tirade of insults and criticisms about how Junior will never amount to anything by “playing with gadgets” and about how much of a slob he is. Junior sheepishly tries to defend himself as he holds onto his latest device meant to train pets through mind control. Mommy laughs when she hears Junior’s claims about his current project. While she continues to rant and rave, she tries to grab the device from Junior hands in order to destroy it out of frustration, but as she does so, she accidentally activates it in her direction. She immediate freezes into a trance. At first, Junior is in a panic. He really had no idea the device was powerful enough to influence humans. He is about to deactivate the device when he realizes that this is a rare opportunity to test the device with a real human subject. He decides to start with some simple commands, such as touching her nose with her fingertip, sticking out her tongue, and then both simultaneously. She reacts flawlessly. This entices him to try some more advanced commands. He commands her to clean the mess in the room, but to add nuance to the command, he instructs her to continue speaking to him as she would normally. She reacts accordingly by beginning to straighten up the room as she recommences insulting him. As she bends over to pick up some objects, Junior cannot help but linger his gaze on Mommy’s luscious ass. He commands her to freeze. As she is frozen in this position, Junior can’t help but admire the view. He comments on how he often overheard other guys refer to his mom as a MILF and remark about her thick, curvy ass. However, this is the first time, he’s ever allowed himself to let those thoughts sink in. He debates with himself on whether or not he should push his experiment further. He ultimately rationalizes that he should push forward for the sake of science, but it’s obvious that lust is his true motivator. He now commands Mommy to return to cleaning the room while talking to him as she normally would. However, now he wants her to do it in a sexy way while being completely oblivious to how she is acting and Junior’s reactions. She goes back to cleaning and talking, but now she is clearing making a show of it by lifting her skirt up above her waist to seductively expose a skimpy thong, stretching and bending at the waist to pick up items, squatting down and spreading her legs, bending down in the “head-down, ass-up position”, crawling, etc. The whole time Junior is following her around enjoying the show, even occasionally reaching out to cop a feel and commenting on Mommy’s luscious body. However, in Mommy mind, she is completely unaware of how she is acting and believes she is simply cleaning and lecturing Junior as he listens quietly. At this stage, Junior decides to try something more brazen. He commands her to straighten up and return her clothes to a normal state. While she is still in a trance-like state, he asks her to tell him her most intense, deepest fantasy. Without hesitation, she responds, “Mommy wishes she could act like a slut”. Junior laughs at the irony, considering the contrast to the conservative, “type A” image that she obsessively tries to project. However, he decides its time to grant her wish. He tells her that soon she will hear music that will make her feel the uncontrollable urge to twerk and shake her ass. He tells her to snap out of her trance and act normally. She begins to lecture him as usual, but then Junior begins to play the music Mommy begins to feel the urge to show off her ass and appears confused and concerned. At first, she appears to resist the desire, but soon she is lifting her skirt over her waist again, twerking and shaking her ass for Junior in a variety of positions. Soon she is completely lost and relishing her exhibitionist show. As Junior notices how she is enjoying herself, he decides to ask her, “Is Mommy enjoying acting like a slut for her baby boy?” Without hesitation, she replies “Yes, Mommy loves acting like a slut for her baby boy!”