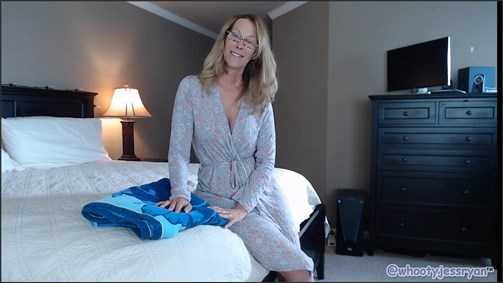 Impregnation Fantasy, MILF, Older Woman / Younger Man, Role Play, Taboo
Mom and son are on a vacation together, staying in a hotel room. Scene starts with mom stepping out of the bathroom wearing a robe. She says she is happy the two of them could get away after his father left them. She is going to the beach and wants his opinion on the new bathing suit she bought. She removes the robe and reveals a sexy leopard print bikini. She shows it off briefly and asks what he thinks. He loves it. Feeling confident, she leaves the room. Later, mom comes back to the room wrapped in a towel with her bikini underneath. The beach was amazing and the water was so refreshing, she says. She wants to take a shower before dinner. She goes into the bathroom, leaving the door slightly open. He watches her remove the towel and strip out of her bikini. She jumps in the shower and (very briefly) rinses her body. After, as she is drying herself off, she notices her son watching her through the door. She gasps and tries to cover her naked body. She scolds him for spying on her while she was showering. Then she notices his huge erection protruding from his pants. Is that from watching me? It’s so hard. Does my body really turn you on that much? She hasn’t felt desired since dad left. It excites her to see him so hard for her. She starts touching herself as she stares at his boner. She tells him to lie down on the bed. She slowly removes the towel and reveals her naked body. Is this what you want to see? She asks. She wants to taste his cock. She starts sucking on it. He wants to feel her pussy. She says they can’t because she didn’t bring any condoms. She could still get pregnant and right now is her most fertile time. She continues to suck him until she gets so wet she can’t control herself anymore. Well…maybe we can try it just for a minute, she decides. She tells him it will feel really good inside her, but he can’t cum inside no matter what. She climbs on top of him and slides his cock into her pussy. They both moan in pleasure as they fuck until he shoots a huge load directly inside her pussy. She gasps and climbs off. She shows him the huge creampie he left in her. Didn’t you hear anything I just said? She goes into the bathroom to quickly wash out the cum.