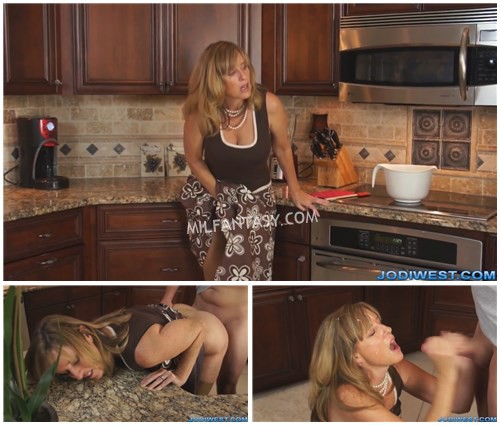 Jodi has her hands full taking care of her family. Getting everyone off in the morning. Making sure they have everything they need for a productive day. Keeping them all on schedule. She acts shocked when she calls out for her husband to get a move on, then feels strong hands behind her on her bottom. Thinking it is her husband, she is surprised to find her own step-son sliding his hands up her skirt. She swats his hands away with a spatula. “There is a time and place for everything”, says Mother as she adjust her skirt back down. “Now be helpful and give these to your Father so her can get on his way to work” Jodi says to her son and hurries him from the kitchen.

As she puts away the rest of the dishes, Mother’s mind wanders as she thinks of her son’s strong hands on the rest of her body. Soon her hands are pulling up her own skirt and inside her pantyhose and panties. After a moment of guilty pleasure, she recomposes herself. “Oh, there you are” she calls to her son and brings him into the room. “Do you have everything for class” Jodi asks, giving her son lunch money. But there is something else she has been helping him with. Since she has been allowing him to have sex with her, his concentration at school has improved, and his grades are getting better. “You know, once you get done with your college placement exams, you will have to get a girlfriend to do this for you… but until then…” Mother slips her son’s penis in her mouth. She brings his cock to full hardness, then turns around, allowing him to enter her from behind. “Be careful, go slowly. You know your penis is much larger then your fathers” Jodi says as she lifts her skirt, pulls down her pantyhose and then lets her son slide his hard member deep inside his mother. Jodi can’t help herself, and orgasms on her son’s cock as he is thrusting deep in her. She has him quicken the pace, so they can finish quickly. Her son grasps his mothers hips and drives his member in her with youthful exuberance. As he nears orgasm, Mother wants to see his penis spray it’s seed. So she turns around and makes him spray stream after stream of cum on her. Her face covered in her own son’s semen, she instructs him to go clean up so she can give him a ride to school. 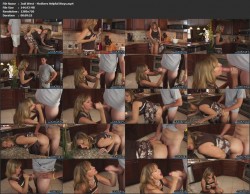