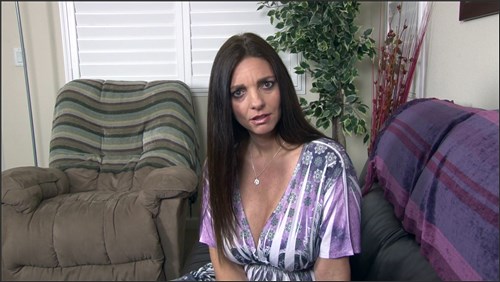 Mindi is asked over to her neighbors house by her sons friend. Mindi says hi to her long time neighbors from the other room. He asks her if she loves her husband. Mindi replies that she is a happily married woman. But he has some dirt on Mindi as he saw her having an afternoon affair and has the video to prove it. He says the only way to keep him quiet is to have sex with him or he will show her husband the video. Mindi notices a huge hard on in his pants. Mindi refuses but she is caught and she knows it. After more threats of disclosure, she agrees to let him finger her. He then tells her he wants to have sex with her right there on the spot in the room next to where his parents are watching TV. She is reluctant but she shares that she likes to be a little dangerous at times. She gets a little closer to him and lets him work her pussy with his fingers. She is amazed at his technique for such a young man and starts to moan with pleasure. She is very nervous about getting caught by his parents but what he is doing to her feels so good. She yells to the other room that she will come in there in a few minutes and proclaims she and their son are having a great conversation, all the while grinding against the skilled young mans fingers. She stops what is happening and tells him that is enough but he wants to slide his hard cock in to her pussy. He pulls out his big cock for her to admire. She likes what she sees… he then says all he wants to do is taste her. He reveals that he has stolen a pair of her panties and knows that she will taste delicious. She agrees but tells him that is all that will happen. As he licks her pussy perfectly, she is invited by his parents to stay for dinner, which she agrees to. He continues to eat her pussy so well that she now wants his hard cock inside her and demands him to fuck her. He tells her to take off her dress so she can see her lingerie, she says no because it will be harder to cover up should his parents come in the room. But she is so excited, she agrees and takes off her dress. He slides his big cock inside her and starts to fuck her hard… she cums as quietly as she can all over his big cock. She puts her dress back on and starts to stroke his cock, demanding that he cum all over her tits. He cums all over her tits. She tells him that this will never happen again and gives him her panties for fucking her so well