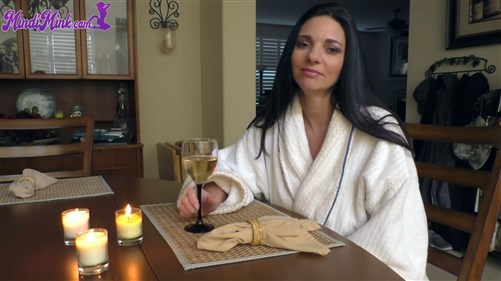 Son decided to put a plan in motion to seduce his mom. He decides to walk out in his boxers with his erection sticking out of the hole so his mom can see it. She sees it and is surprised by how nice it is and stares at it for a second. She tells him his cock sticking out and to put it away. Instead he just says, “here mom let me give you a better view” and he takes his pants completely off and stands in front of his mother naked and goes up and hugs her from behind. She tells him to go to his room as she yells at him. That night mother comes home to a nice candle lit dinner that her son had made for her. She thought it was so nice after a long day at work and decided to go change out of her work clothes and into a robe. She came down for dinner and he had a nice glass of wine ready for her. She sat down to eat and her son came around behind her and started massaging her shoulders. As she started to relax he slowly started massaging her breasts. She then realized what was going on and told him to stop because it was wrong. She got up to bring her dishes to the kitchen and he pulled out his cock again. She again yelled at him. Deep down she wanted her sons cock. Later, son had seen his mom outside sunbathing, she asked him to put lotion on. He started rubbing lotion on her back and started rubbing her butt and pussy as well. Mom was getting turned on. Son took his cock out and showed her. She finally gives in and says come & fuck me son.