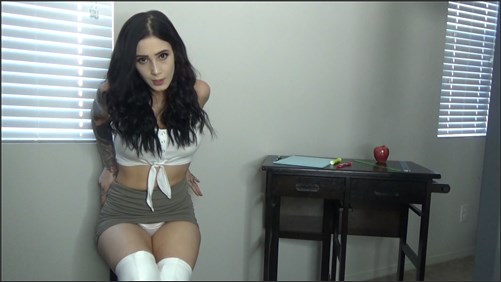 A young boy awakens to the sight of his slightly older step-brother with their Step-Mom behind him. Feeling the bed rocking, his eyes widen with fear as he realizes his Step-Mom is stroking his step-brothers penis under the blankets. She’s playing with his tight young virgin ass as she whispers into his ear. Realizing the youngest boy had awakened, she assures him he is just dreaming, and instructs his older step-brother to say the same. He goes back to bed and dreams that he is in his classroom, but the teacher is now his Step-Mom. He watches on in awe and fear as she beings to tease him and touch herself. He runs to the door, discovering it is locked. She laughs as the scared young boy forms a puddle in his pants and the floor. She lures him back over and demands he pull down his pants, revealing his little underwear. He whimpers but obeys. She snaps her fingers and he falls under her spell, pulling down his soaked underwear obediently. She demands he watch a video, a video where the young boy recognizes his older step-brother as the star. Two women are doing horrible things to him, he’s tied up as they shove their bushes and bubble butts into his face. They take turns using him for their pleasure, even using him as their toilet and letting him use them as his. They finger fuck his tight young virgin butt and then shove their fingers into his mouth. The young boy looks up from the video, horrified as he realizes she is now touching herself and getting naked while she watches him. She asks the boy if he knows what’s happening in his pants or what to do with it. The confused boy listens obediently as his Step-Mom explains how to touch and stroke his smooth, hairless, developing penis. He obeys, but the sadistic Step-Mom pulls out a vibrator, pressing it against his too-sensitive head as he squirms and tries to run away. Annoyed, she decides that maybe he will like it better in his little butt. She instructs him to stick his little fingertip into his tight butt and stretch it out for her while he continues touching his penis. She continues using his holes and then makes herself cum with another little boys pair of underwear as she watches him defile himself. She tells him a story of her last young boy escapade as she makes herself cum to the sight of her little step-son experiencing all of this pain and pleasure. Unsatisfied with his dry orgasms, she throws him down to the ground and wraps her lips around his entire penis before swallowing it up as her hips slam down onto the boy over and over until he cums inside her. Kissing his forehead, she assures him he is still dreaming and sends him back to bed.