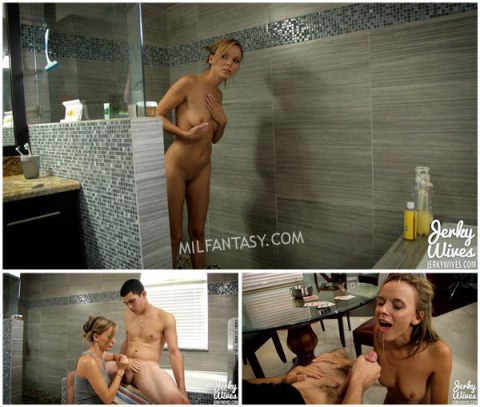 Pristine wants to make sure her son is healing and offers to relieve his discomfort once again. Two days in a row and she is massaging that huge cock all over. Bruce gets too excited and shoots his load on his mothers chest and chin. Before too long, Pristine offers to help her son release his tension because she knows that he is helpless with his injured wrists. She lubes his dick up and strokes him on the couch. Her son looses control again and he shoots his load all over her blouse. This routine has become a regular seen at the house and Pristine can’t keep cleaning all of these clothes. Time after time she lubes his dick up and strokes him to completion. Pristine is so tired and wants to get this over with, she takes her top off so he doesn’t get it sticky like the others. Her son can’t stop starring at her tits. She has to use two hands to get him off and he blows his load in her hand.

Pristine finds her son laying down and knows that she needs to help him out and he warns her to take her night gown off. He keeps starring at her sweet tits and they make his dick hard. She enjoys making him cum now and knows how to make sure that it only ends up in her hand. Bruce wants his mother to blow him but she is not happy with this request. Pristine finds her son in the kitchen and feels badly about how she reacted to his last request. She gets on her knees, grabs his dick and shoves it in her mouth. Licking and sucking his dick, she really knows what to do with a cock in her mouth. Trying to deep throat his cock, she gags several times until he shoots his load right in his moms mouth! She has to swallow it!

Pristine is blowing her son again and he wants to touch her more, she gags on his huge dick but is able to deep throat it all the way down. With his dick down her throat, Pristine’s son explodes and launches his load right down her throat.
After a quick game of strip poker, Prestine has her sons dick in her mouth and is working it over. She really loves making her son cum in her mouth. She keeps loosing at this game and has to suck her sons dick until he blows another load in her face like a fire hose! Pristine now deserves the biggest and best mothers day card ever! 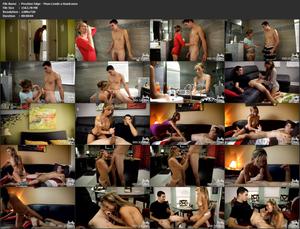