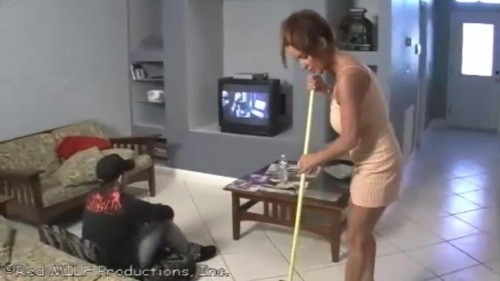 Jeremy had been best friends with Steven all their lives. He was welcome at Rachel’s house day or night. He could just walk in and hang out as long as he wanted. Both moms loved the boys and they were second family. Rachel was cleaning as Jeremy watched a movie. She complained to him about Steven being messy and leaving without picking up. Jeremy listened to her, feeling bad that she had to clean up after her grown son. Jeremy had quite a crush on Rachel when he was younger, now he began to look at her differently. He was spending a lot of time at her house especially when he knew Steven was away. Rachel thought nothing of it and enjoyed his company. Her divorce left her with a lonely life of dating losers. That afternoon as Rachel swept the floor, Jeremy saw her bare pussy as she bent over the chair. He felt his cock grow fast in his pants. Jeremy quickly adjusted it so Rachel would not see. She rambled on about life with him not knowing he wanted to explode right there. Rachel bent over the coffee table to straighten the magazines; Jeremy looked down her tight sun dress to see her wonderfully inviting cleavage. He had been jerking off thinking about her for a year. Jeremy could not take it when Rachel sat down next to him; she crossed her long sexy legs and dangled her shoe. He looked her up and down, Rachel oblivious to his attraction. He excused himself and went to the bathroom. 30 minutes had passed and Rachel wondered what was taking him so long, she wanted to watch a movie with him. She knocked at the door and it opened, Jeremy was masturbating. Rachel almost considered him another son to her and she did not want him to feel ashamed. She asked him if it was the movie that got him turned on. Jeremy knew he could lie but she was standing right in front of him. He also knew Rachel dated younger guys and thought he should take the risk. He told her he was attracted to her and confessed everything. Rachel smiled and sat next to him. Her sexy voice and her green eyes just filled Jeremy with passion he had never felt before. It all made sense to her now, how he would spend so much time with her. She felt a wave of sexual energy flush he body. Rachel gently took his cock in her hands; she looked him in the eyes and asked if that was what he wanted. Jeremy told her he had only dreamed that this would happen. Rachel lifted her dress and showed him her pussy. She pulled her tits out and placed his hands on them. Rachel threw her head back as he licked and sucked her hard nipples. She stood up and put her leg on the towel rack. Jeremy licked her sweet hot pussy and fingered her to orgasm. Rachel stroked his cock. She got on her knees and pleasured him. Licking his cock slow and looking into his eyes. Jeremy gave in to her and soon he came all over her tits and face. Rachel rubbed his cum into her skin; she and Jeremy finally had what they desired.