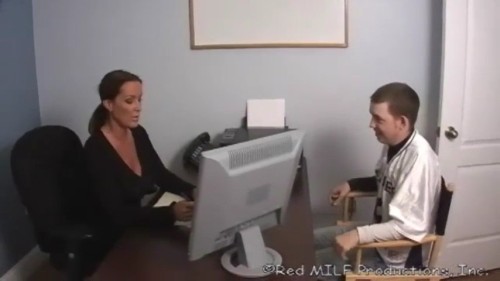 Rachel Steele had been teaching for years. It was her passion. The pay was not much but she loved her job. The only problem was she had an attraction for the young guys in the school. She lured one after school on afternoon for a tutoring session. The lad did not know he would be seduced by sexy horny Ms. Steele. She sucked his cock and mounted him sliding his throbbing dick in her hot wet pussy. Just as she was about to orgasm, the principle walked in and caught them. Ms. Steele jumped up and adjusted her dress. The young man quickly pulled at his pants. Ms. Steel was ordered to his office. The principle fired her. He would not have teachers fucking students. Rachel soon found another school and was hired, they did not know of her past. Her first day was smooth. She met with the principal and he showed her to her office. He informed her they were short on counselors and she would do after school work one on one with students failing. Jeremy was on the lacrosse team and a valuable player; however he was failing a class and would be kicked off the team unless he raised his exam score. He was sent to Rachel for help. Rachel was trying to get over her lust for these young students; she thought will power would work. Jeremy came into her office, he was young and innocent just the way Rachel liked them. He began babbling on about his studies, Rachel tried to concentrate on what he was saying but she drifted into her fantasy of a sexual encounter with him. She could not fight it, Rachel bit her lip and paced while he babbled on. She felt a heat wave come over her. She took her hair down and slid her ass up on the desk. Jeremy still talking looked a bit surprised. Ms. Steele’s lust was too strong. She leaned in and interrupted him, telling him to close the door. She sat facing him, legs apart so he could see her panties and sheer stockings. He noticed her generous cleavage and shapely legs. Ms. Steele rubbed her leg on his shirt and up his arm. She silenced him with her seduction. She unzipped his pants and pulled them off. His cock was erect and pointed at her. She opened her tight sweater and pulled her tits out of her bra. He mumbled that he could not believe this was happening, she put her finger to his lips and silenced him. Ms. Steele began her seduction. She sucked his cock slow and deep. She opened her legs and put his hand on her pussy, he fingered her until she orgasmed. She pressed his head into her huge tits as she came. Now it was his turn, what she longed for, to take all his cum. She sucked and stroked his cock until he shook with excitement; Ms. Steele looked deep into his eyes as she prepared him for the experience he would never forget. He shot his load into her open mouth. She rolled his cum around and swallowed it. Rachel’s lust had been satisfied so she gave him an “A” on his exam.