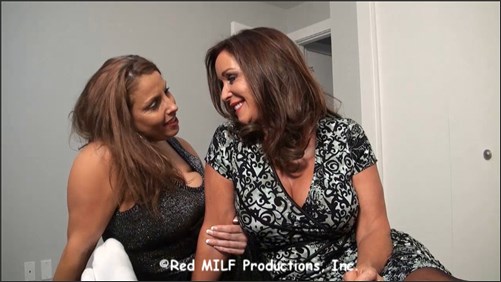 Rachel and her sister Stacie were both divorced and lived together. They often had their nephew over to visit because his mother was very strict and he needed to get away during the summer. Rachel and Stacie kept their appearances up and their figures. Scott had a buddy over to shoot pool, Rachel and Stacie offered to make lunch for the boys. Scott’s friend made a comment on how hot his aunts were and how he would love to bend them both over and fuck them. Scott defended their honor and was disgusted with his friend’s comment. He quickly changed the subject. The next few days Scott began to notice how hot his aunts were. He masturbated to their images in his mind. He became depressed because he was confused. His girlfriend had broken up with him and he was becoming sexually frustrated living with the aunts. Rachel and Stacie noticed and became very concerned. They questioned him until he admitted he was lonely and he was attracted to older woman. Rachel and Stacie knew just what he needed. They lived the wild lifestyle so they figured out just what Scott needed. They stripped off their dresses and took turns sucking his young cock. He could not believe his aunts were sucking him off. Eventually he fucked Aunt Rachel from behind, her pussy squeezed around his cock as his Aunt Stacie coached him on. After a few pumps he pulled out afraid he would cum to quick. Rachel quickly sucked up his cock into her mouth as Stacie sucked his balls. He pulled out again warning them he was going to cum. Aunt Rachel and Stacie laughed at his inexperience and told him to let it out. He came into their waiting mouths. Scott was a happy young man now. His fantasies with his aunts came true and his frustrations were gone.