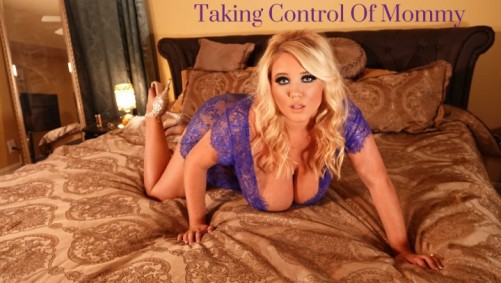 A POV custom video portraying the story of a prudish, grumpy, stern mother who is transformed by her son into a sex hungry, big breasted, air-headed bimbo through the use of nanobot technology. This story portrays the mother slowly, in stages, being transformed into the sexual play toy of her son’s wildest imagination. A prudish, stern mother is harshly reprimanding her son for spending way too much time locked in his room sitting in front of his laptop and tinkering with all that electronic gadgetry cluttering up his room. He has been neglecting help with any household chores. To make matters worse, she delivered folded laundry to his room this afternoon and took a quick look at his browser history. She was appalled to find that he is frequently visiting MILF porn sites with taboo themes! The mother is visibly disgusted, angry, and completely at a loss for how to deal with his perverse and negligent behavior. In exasperation, she send him to his room until she is able to cool down and figure out a way to address this awful behavior. It is later in the evening. The mother has changed into a comfortable bathrobe and slippers. She is still maintaining the “librarian” look. She still appears very tense and disturbed over the events of the day. The son hands her a cup of tea. Unbeknownst to her, he has placed nanobots in the tea (hundreds of microscopic, self reproducing nanoids capable of manipulating tissue structure and calibrating neurological pathways within the human brain). The mother comments on her son’s kind, but out of the ordinary gesture. While kind and considerate it doesn’t change the serious and deeply troubling behavior of her son. She begins to sip the tea and ingest the nanobots. It doesn’t take long for the nanobots to begin the work they have been programmed to perform. The mother begins to feel light-headed and finds it difficult to speak. She is fully alert to her surroundings but finds it difficult to move. The son grabs his smartphone app and adjusts his mother’s sexual desire by greatly increasing her libido and even the size of his mother’s breasts. The mother can now not stop playing with herself. The mother is wearing sexy, sheer lingerie and slutty, high heel shoes. This entire scene is the portrayal of the air-headed bimbo mother seducing her son into fucking her brains out. This scene will depict the mother covering her gorgeous body in massage oil as her desire for her own son increases at an ever intense rate. The mother is using intense, lewd, sexual, giggly, language to seduce her son with her shiny legs, tits and ass. She is masturbating feverishly. Her sexual impulses grow to an ahego uncontrollable orgasm, all along she desperately begs to be fucked by her son. As the scene comes to a conclusion a POV of being fucked by her son missionary is depicted. The scene ends with a huge cream pie pouring out of his mother’s shuttering cunt. She relaxes and coos with pleasure over the incestuous sex they enjoyed together. She express her pleasure and hunger for more!