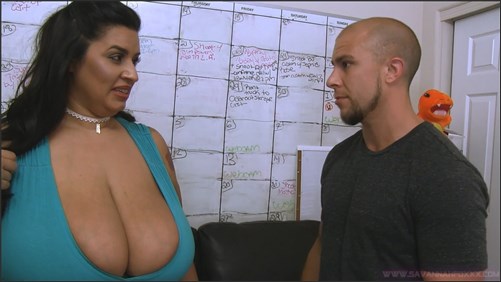 Sofia comes home from a long day at work. She hears some strange noise coming from her sons bedroom. When she goes to investigate she finds him jumping around and air humping. She asks what is going on? He immediately turns off the music embarrassed his mom caught him. He explains there is a school dance on Friday and he has never danced with a girl before. He was trying to practice. Sophia laughs and tells him is he is doing it waayyyy wrong. He asks for her to teach him. She has to make dinner, but he begs her for just a couple minutes. She relents and agrees to help him. She tells him first that women like it slow. He gets behind her to try and dance. He grinds up against her and pumps his crotch against her massive ass. She yells at him to stop! That’s definitely not how you dance. He explains it is though! This is how all the girls dance now. She shakes her head and orders him to slow down and wrap his arms around her. Now isn’t that better? He presses into grabbing her big belly tight. Again he starts pumping her from behind making her big booty jiggle everywhere. She tells him this is all wrong, but he insists that’s how he sees everyone dancing now. She tells him she doesn’t think other girls will like his dancing but he doesn’t care. He tells her he’s really not interested in thouse girls anyway…he really wants to go to the dance with her… Sophia is flattered, her son is so sweet. She leans over and gives him a quick kiss, but she is to old to go to a school dance! He begs and pleads with her, his mom is better then any girl at school! She has missed dancing so she agrees he can take her! Only if he stops dancing like that though. He tells Sophia its ok, and grabs her tight. They slow dance for a minute before he notices how low cut his moms dress is. Her massive breasts are just spilling out of top. He knows for a fact not any girl at school has boobs any where near as big as his mom’s. Her giant boobs graze the top of his hands and He feels himself start to get hard against her. He knows its wrong to feel THAT way about his mom but its just her tits right? Its not like he hasn’t touched them before when he was younger. He slowly inches his hands up to cup them. They feel so warm and soft in his hands he cant help but give them a little squeeze. His moms just keeps dancing with him, maybe this is how real dancing works…he moves his whole hand around them and makes them bounce, enjoying their heavy weight of them in his hands.He really liked the way she felt jiggling against him though and asks if they can try dancing his way. She agrees after all if he is taking her, then she should probably see what all the young are doing today. He grabs her from behind and starts to really pound against her. Its even better then he imagined! There is so much of his mom! He feels her ass start to push back against him as he humps her big booty. Her dress starts to ride up as he thrusts against her. She bends over and starts jiggling her ass with him. She feels her dress ride up and knows she should really pull it down. She doesn’t want her son getting any inappropriate thoughts about her. But its been so long since she has been dancing that she just ignores it. He son is having fun right? She feels him grab her tits and really hump her hard from behind and gets confused,.. Are we dancing still baby? Yes mom, I’m having so much fun! He is grabbing her so tight,that she begins to imagine things she shouldn’t. Oh, no I told myself not to think these things they are so wrong! But she feels his young strong body pressing up against she and it makes her think about his cock! The way it felt in her mouth last time… it made her feel so young and wanted. Maybe just one more taste wont hurt? The more they dance the more she feels herself losing control in her sons arms. When he reaches around front to grab her massive breasts she decides to go with the flow. Then he starts grinding on her ass and she can feel his stiffness pressing into her. She is overcome by thoughts of his cock. She imagined herself jumping on him and riding him but tries to quickly banish that image from her mind. Its her son! She knows what they did that 1 time was so wrong, but she cant stop thinking about it! She loves the way he feels inside her, and one more time wont hurt right? She turns around and opens her mouth for him.