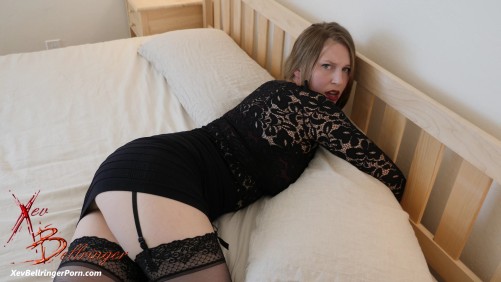 You had never seen your mother act this way before. Dress this way. Or speak this way. Like a slut. You watched her prepare for her date through the door, snapping a garter into place while she talked to the other man on the phone. He asked her to slip her hand down into her panties… no, the panties HE made her wear. She moaned like you had never heard, and began rubbing her pussy furiously. She barely said it through gasps of pleasure, but you could make it out. She was ‘his little cock sucking slut.’ And… did she just cum? For him? It made you furious even jealous. She was YOUR mother, she belonged to you. Not him. Just as she hung up and tossed the phone aside, it slid off the bed behind the headboard. Your mother hurriedly reached through the wood slats to retrieve it and her lacy sleeve snagged and caught on a nail. She struggled to free herself, her massive ass bouncing in the air as she fretted about being late. Your mother realized she would need her son to come free her. She desperately pulled her tight skirt down around her round booty, attempting to hide the slutty lingerie. She had no idea you had been watching the entire time. Or that you were feeding the deep jealousy, letting it swell, and grow into lust. You actually enjoyed watching her struggle in front of you, trying to understand why her own son wouldn’t help free her arm. But the more she wiggled on the bed, the higher up her skirt pulled up over her ass. You made her admit to everything… the real reason she was going out that night… the reason she was dressed like a slut… and what she wanted to DO with that man. Your mother was at your mercy. You could do ANYTHING you wanted to her curvy body. You pulled the skirt down around her wide hips, and pushed her blouse up over her juicy tits. Your mother gasped, shocked by her son’s behavior and his desires. You grabbed and groped her creamy ass cheeks, and she protested. At first. But you knew what she was, what she wanted. A big, fat cock in her mouth to suck on. And you would be the one to give it to her.